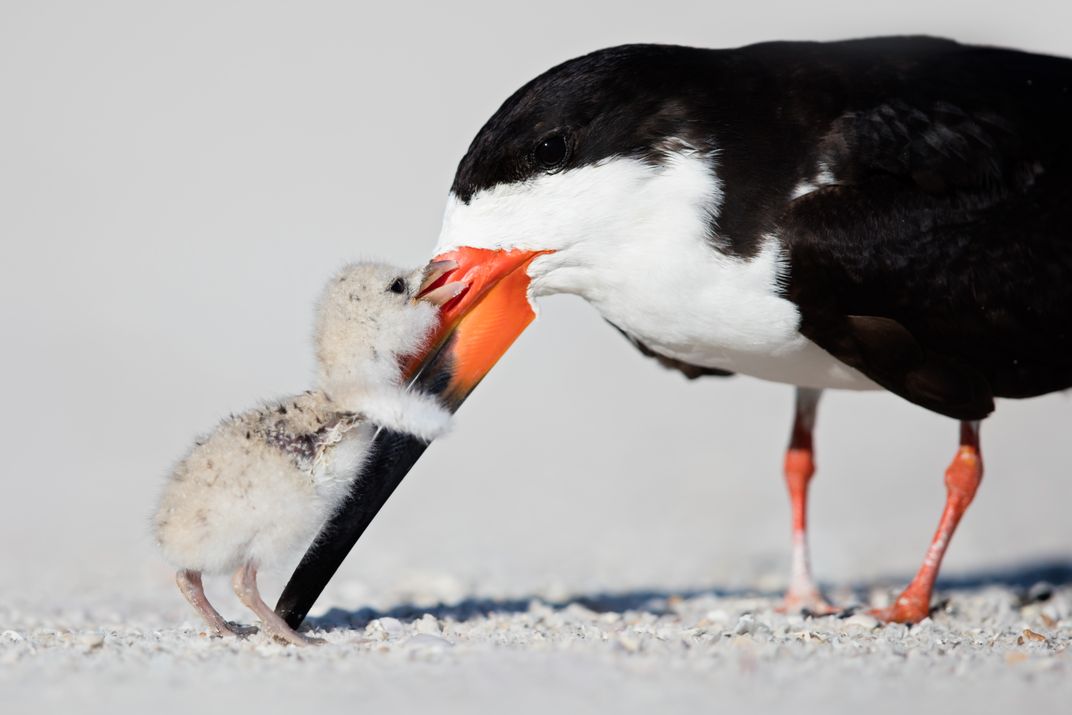 Witness the affection this Black Skimmer chick shows for its parent in a once- in- a- lifetime photograph. During the summer, Black Skimmers nest along the coasts of America and each year battle predation, weather and increased human encroachment on the beaches they nest on. After walking miles along Florida's white sandy beaches, I found a remote and quiet location where Black Skimmers started to scrape for nests. As the season progressed, this Black Skimmer family in the photograph had two eggs that they fiercely protected vicious from predators like gulls. As time passed, the parents rotated the eggs ensuring they do not overheat. On a sunny day in Florida, one chick hatches from its egg creating a new challenge for the parents: continuously feed the chick. As a day or two passed after the first chick was born the second chick made its entrance into the world. The older chick used its early hatching and size advantage to bully the other little chick by always eating first, stealing meals and pecking the little one to death until he left the shade under the parent. To get out of the Florida heat, the smaller chick often used the shadow I casted from lying down near the parent. On the morning of July 16, 2016 I headed out again to document the Black Skimmer family. After arriving before the sun peaked above the horizon, I approached the nest by crawling on my belly to make sure I did not disturb the family. After lying on my stomach and patiently waiting all morning, less than two hours after sunrise the parent in the photo flew directly to the smaller chick and gave it the first meal of the day making sure the younger chick did not get its meal stolen. After the chick quickly gobbled down the fish it ran up the the parent in the photo displaying the behavior in the image above. This moment shows why Mother Nature is truly the greatest artist of us all.