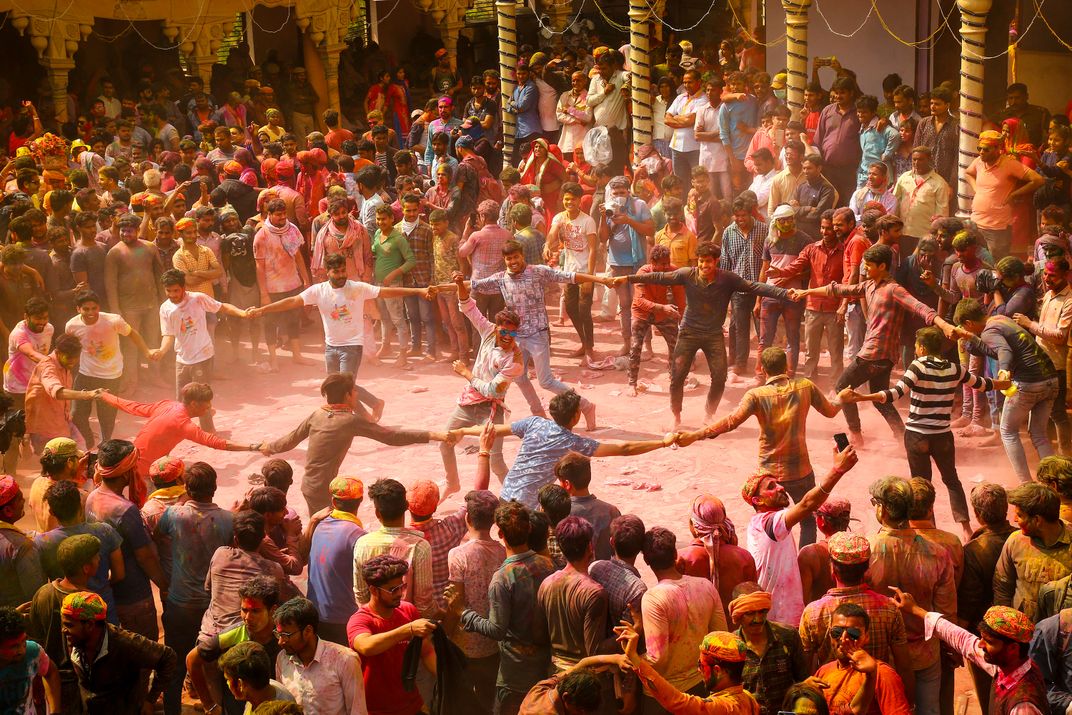 Holi of Barsana, the birthplace of Radha, a village, 42 kms away from Mathura, is of particular interest. Here, men from Nandgaon, the land of Krishna come to play Holi with the girls of Barsana and hope of raising their flag over Shri Radhikaji's temple. But, instead of colours they are greeted with sticks by the gopis. Hence, the Holi get its new name here-Lathmaar Holi. Smart enough, men come fully padded as they are fully aware what kind of welcome awaits them and also the fact that they are not allowed to retaliate on that day. In this mock battle of sorts, they try their best not to be captured. The unlucky one's however, are forcefully led away and get a good thrashing from the women. Further, they are made to wear a female attire and dance in public. All in the spirit of Holi. Renowned poets like Surdas, Nand-das, Kumbhan-das and others have picturesquely described how Lord Krishna received similar treatment and was forced to don a sari and wear make-up and perform dance before being released by the gopies. The next day, it is the turn of men of Barsana. They reciprocate by invading Nandgaon and drench the womenfolk of Nandgaon in colours of kesudo, naturally occurring orange-red dye and palash. Today, the women of Nadagow beat the invaders from Barsana. It is a colourful site. However, in the interest of tourism and safety, the state tourist board has set up excellent vantage points for the public. A large open ground, on the outskirts of the town is specially set aside for the most magnificent display of the festivities. The week long Holi celebrations also continue in the various Krishna temples on different days. The celebrations are filled with clouds of colours and of course, much fun.