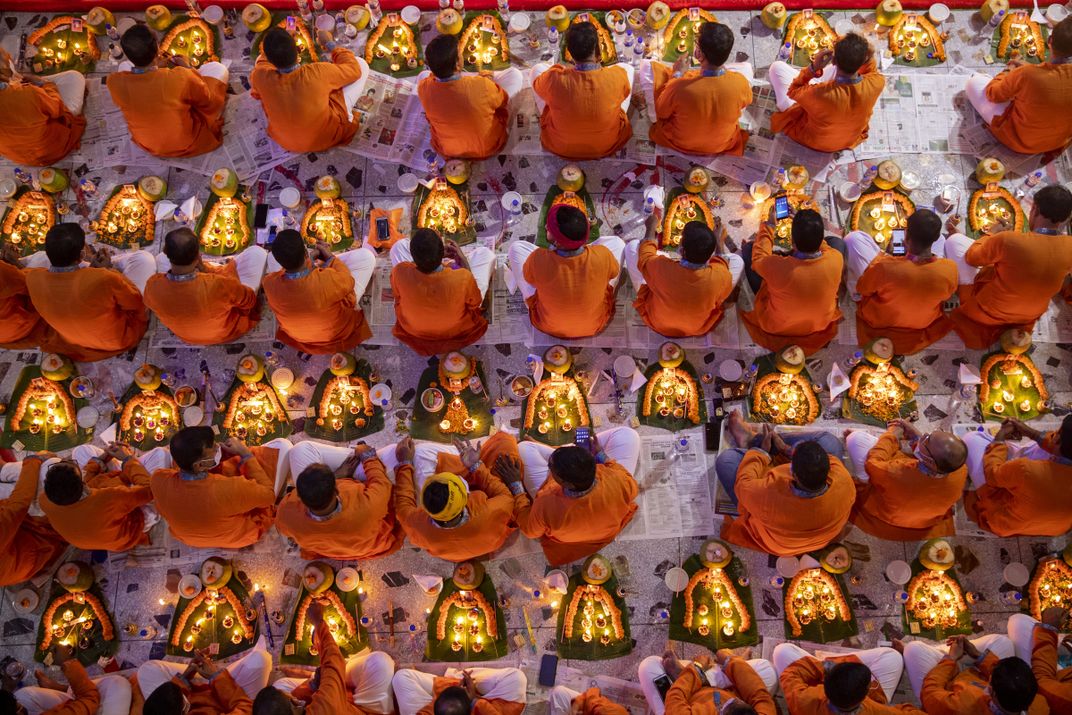 Devotees attend prayer with burning incense and light oil lamps before break fasting during a religious festival called Rakher Upobash or Kartik Brati in Dhaka on November 10, 2020. Bengali people of the Hindu faith in Bangladesh sit in prayer celebrating the 18th century Hindu Saint Baba Lokenath with a 'Rakher Upobas' prayer and fast day Every year thousands of Hindu devotees gather in front of Shri Shri Lokenath Brahmachari Ashram temple for the Kartik Brati or Rakher Upobash religious festival in Dhaka, Bangladesh. Faithful sit in front of candles light ( named locally as Prodip ) and absorb in prayer. Lokenath Brahmachari who is called Baba Lokenath was an 18th Century Hindu saint and philosopher in Bengal. Hindu worshipers fast and pray in earnest to the gods for their favors during the traditional ritual called Kartik Brati or Rakher Upobash. Lokenath Brahmachari devotees pray with light to save their family and dear from cholera and pox disease. Lokenath Brahmachari was born to a Brahman (an elite caste reserved for spiritual service in the caste system) family on the birth date of the Hindu Lord Krishna in 1730. At eleven, he ventured off to the woods with his guru to practice Ashtanga and Hatha Yoga. When he left, he is said to have lived a life of complete asceticism until reaching enlightenment at the age of 90, after which he traveled extensively through Afghanistan, Persia and Arabia, including making three pilgrimages to Mecca. At the age of 136 he is said to have settled in a small town near Dhaka to tend to people who came seeking his teachings and blessings.