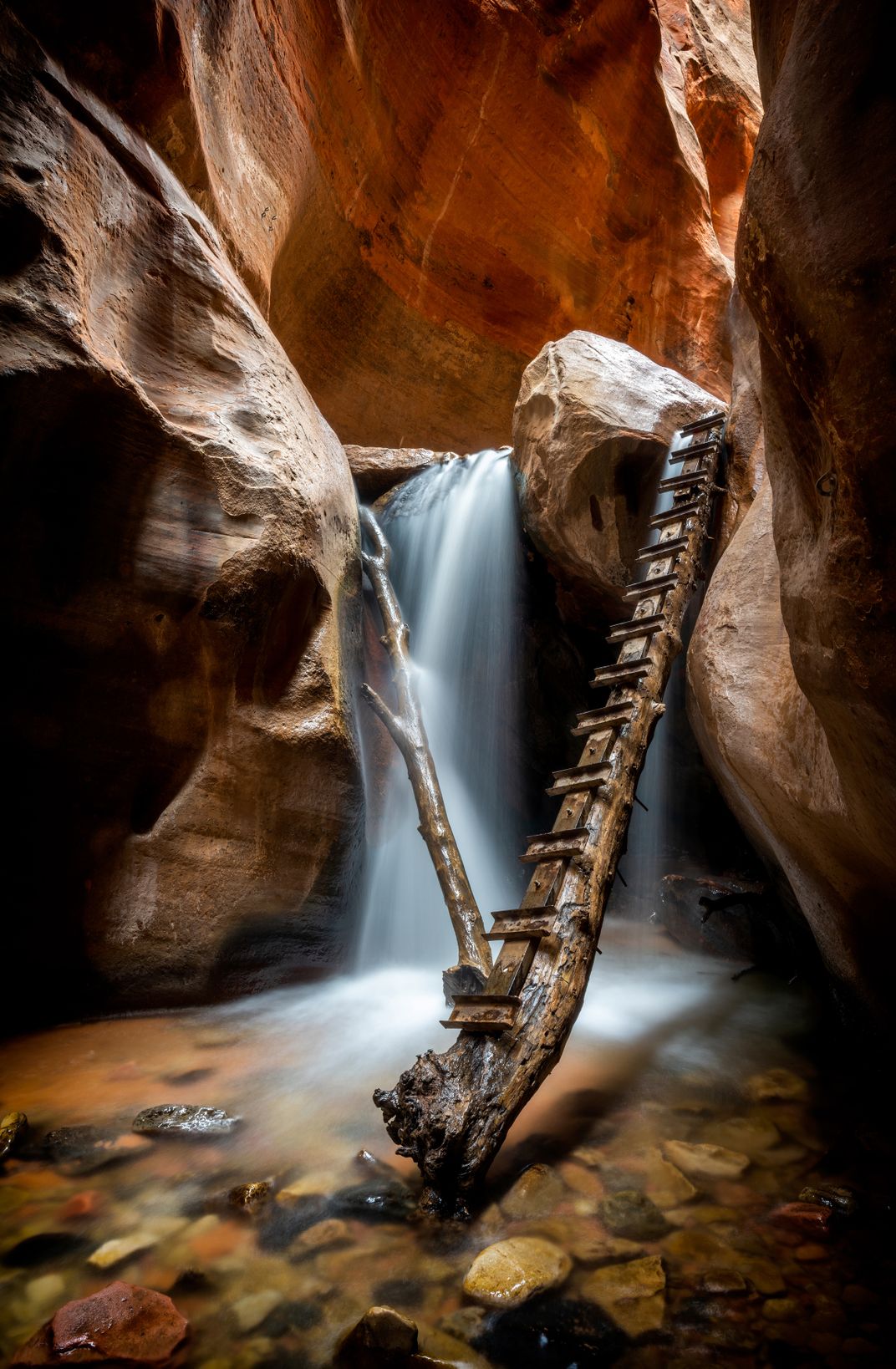 This sketchy but photogenic ladder allows hikers to scale the first waterfall on Utah's Kanarra Creek Trail. Reminiscent of the legendary Virgin Narrows hike in nearby Zion, Kanarra shares many of the same features on a somewhat smaller and less intense scale. This ladder had been on my "list" of must-photograph locations for years, so I was prepared with hours of internet research, the right equipment (GPS, neoprene socks, drybag, etc) and a list of the shots I wanted to get. Actually, I was probably over-prepared, but I wanted to leave nothing to chance. I drove to the trailhead, made one last check of the weather on a phone-app, grabbed my gear and set off down the trail. I got to the ladder without a hitch in the mid-afternoon (when the warm reflected light was at its best). But, I had to bide my time getting shots because there was another photographer already set up at the ladder plus there was a constant flow of hikers I had to work around. But I had all afternoon and there wasn't a rush. I just took my time, enjoyed the incredible view and grabbed a shot when I could. Twenty minutes later I noticed the spray from the waterfall was getting more intense. About 30 seconds later the light started to fade. Frustrated, I backed away from my viewfinder at the same moment I heard a thunderclap. THAT got my attention. I was fully aware that over 20 folks have died in recent years after being caught in the flash floods that fill slot canyons during rainstorms. I looked over at the other photographer as the rain started to fall and made a nervous joke about how my wife would be really pissed if I drowned because of a silly photograph. He gamely laughed but the smile died on our lips as another crash of thunder reverberated between the canyon walls. In a microsecond, we had both grabbed our tripods and were dashing for the exit. Fortunately, it took only a few minutes to slosh out of the slot and reach the safety of higher ground, but I'm confident my heart rate was well-elevated for most of the slog back down the rainy trail as I muttered nasty comments about weather forecasts. It was a hell of a reminder that you can plan all you want but life will mischievously toss unexpected twists at you just the same. This is one of the few shots I got before those first drops of rain. Hopefully, I'll make it back to Kanarra Falls to finish what I started someday soon!